Join Our Facebook Group For Related Discussions Throughout The Week @ https://www.facebook.com/groups/166824303514465/

Click to enlarge. Good Collage. How many people would jump so many feet to an obvious death in under an hour?? ABC says over 200 did!!! Look at these images. They are horribly faked!!! Some people are like 70 ft out from the towers!!!

Now we have shown you a lot of shocking things. The jumpers were NOT real. The Planes were NOT real but it goes much deeper than this. Just about everything we saw was CGI, greenscreen and other Hollywood techniques. No people were under the towers filing and here is the kicker. EVEN THE COLLAPSE FOOTAGE WAS FAKED!!!!  I am NOT saying there is no real video but if there is maybe from N. Manhattan outside the controlled area they did some interviews but I even am starting to doubt that. I don't want to use absolutes and be wrong though!

Now before watching this remember NEVER in the history of the world has a steel framed building collapsed from fire. Yet this guy knows the structure failed due to Jet Fuel and heat????

This is a controlled interview as usual on any of these outlets. They are the enemy. They are there to mislead us.

A structural engineer at least a legit one would never say this on the spot, and we believed this liar!


Let your own eyes and mind be the judge not the media or government.

So we are two believe not only are there two guys in NYC wiht a barcode looking tattoo on their face, but they are both firemen who look IDENTICAL. These are our "fallen heroes"
That isn't a typo!!! All they did was change his middle initial and throw a hat on him and now we have two "dead" firefighters from 9/11. What are the chances? 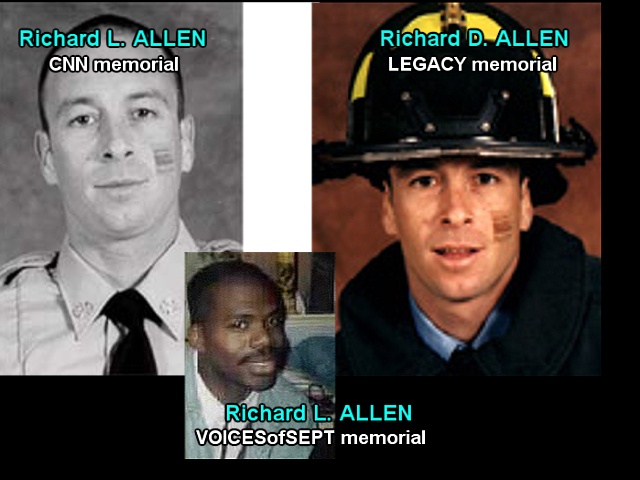 HONESTLY. Do You Think Think This IS 2 fifferent pictures??? 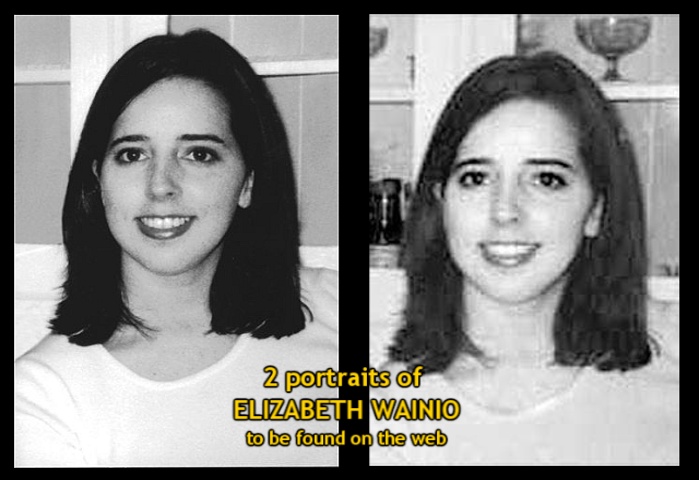 Most "victims" had just one or two pics so they would photoshop a second and make it look like two points in history. Look at Elizabeth Waino. Is one picture not a photoshop of the other? Why photoshop any victims??? These pictures are identical minus the removed props. See a pattern yet? How about the hug trick. Take a "victim" and simply throw an arm around them in the same photoshopped picture. No one said this is easy. Why do you think half of people think we are nuts. They don't put the time in to just look with an open mind. these are blatant photoshops. 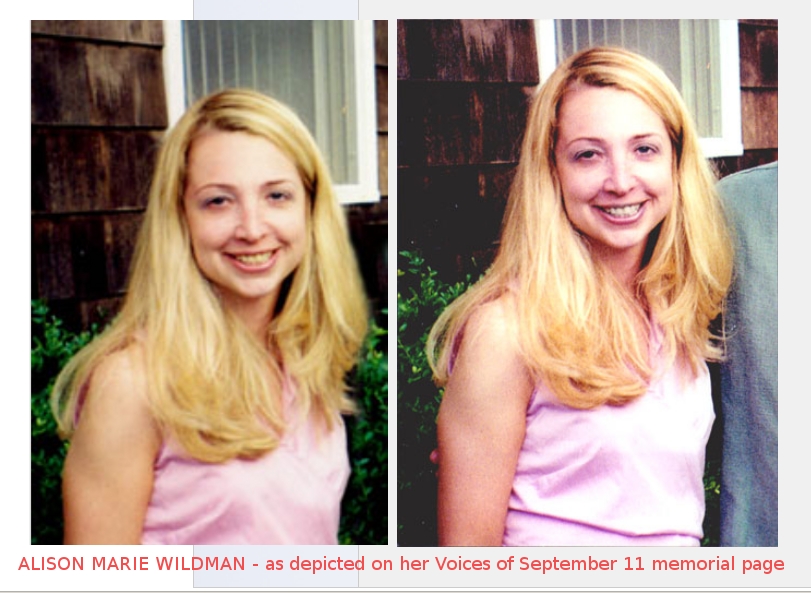 Can you really say these are different pictures?? Did they stay really still and remove all the scenery? These are your 9/11 victims most of which as in thousands aren't even listen in the SSDI.

When you edit a picture in photoshop it stamps it with a new date called EXIF Data. Whether its a contrast issue or a caption added. You have tons of 9/11 victims with their obituaries done BEFORE 9/11! Months before.

Soon we will get into the CGI imagery which I think is the most telling evidence but you need to be eased into it. Ask yourself how these obituaries were done PRE 9/11 with the  flights they were to die on and all? There are many more of these too. I will add more later.

Now this will stir quite a bit of controversary what I say next but I beleive it to be true. There are conflicting theories on how they had no one in these buildings. I will address both. Don't be turned away just listen.  It seems parts of the towers maninly the upper portions were never finished. I know many doubt some of the images espcially the 1972 since the crane is there still but what about 1978. We can see clear through the tower at the top portion on floors where major companies who lost many lives allegedly died. We can see it a farce, We also have posted here the occupancy report of the towers so you can see every listed there ever along with the dates. These floors have several companies on them. So where are they? There are not floors.

The Towers In 1978 . Notice The Top. Those Floors Had many what appear to be just ghost companies on them. Also notice its the "impact" zone where most of the life was lost. This is one thoery on how they were possibly so less occupied. According to their own occupancy report they were only like 30% full until right before....You guessed it 9/11! There is another possibility that seems as likely and I think probably a combination of both. 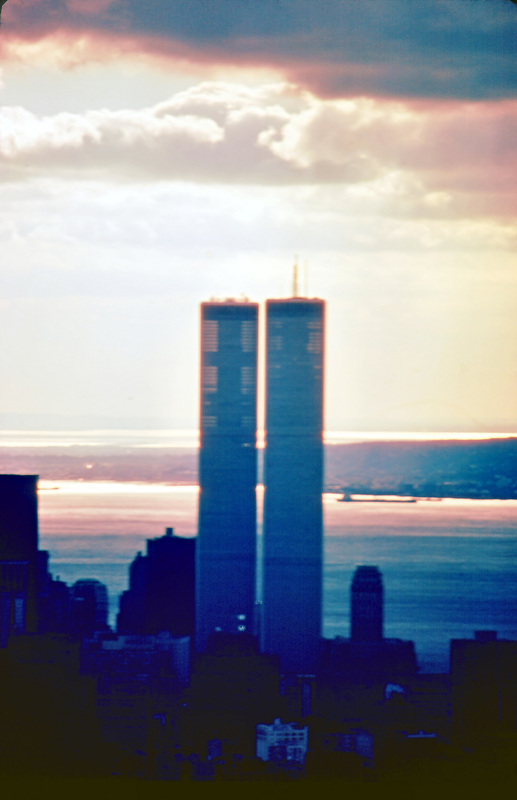 Here is the complete occupancy report for the Twin Towers. Every tenant that was allegedly ever in the building is listed along with the move in and move out date.  http://www.editgrid.com/labc/common/FOIA_Request_Occupancy_WTC_1972-2001 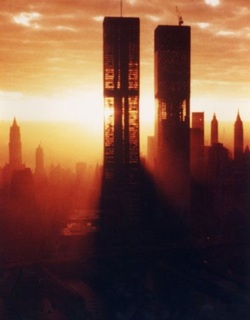 Now this is a few years earlier so doesnnt prove them lying about occupancy but its still a comelling picture! The one above however is frm 1978 TWO YEARS after the companies claiming the most "lost Lives" were allegedly working in there. lol. There is total vacancy. No toilets,Vending Machines, Computers, Servers, MILES AND MILES of phone cable and on n on. The stuff wasn't Vaporised ...Gimmie a break. It is so much more simple. Those contents just were never there. WAY less contents than we were told cuz there were some, BUT AGAIN way less workers than we were told and their companies were very much under control.

This came from an architectural site that seemed very reputable and it's from1978.  The grey one where is seems they didnt add anything to the floors except some siding to cover the illusion! This is 6 years after completion. These floors are said to be occupied? Were these building built just to be demolished later and blamed on a group. I'd say yes.I am NOT saying this wasn't a real building but with the time frame it was built in and these issues you have to wonder about parts of the structure never being finished. They lied about the companies on those floors and two of them Marsh Mcllenan and Cantor Fitgerald claimed about 44 percent of the "deaths" These are companies that lied about even being on those floors! You believe they lost 1400 ppl? This is the theory mainly on LRF which I still believe to a point but not that much. I think maybe 30 percent or a little more was never finished, but who knows could have been higher. Here is a few excerpts from a book called Divided We Stand written by a man named Eric Darton who was a researcher of the towers. This book came out two years BEFORE 9/11.

Eric Darton published in 1999 the most comprehensive 'biography' of the WTC twin towers. It is an essential read for insights into how the towers' tenants might have been 'controlled' - so to speak - after the first 1993 "Al-Qaeda" bombing. 'Divided We Stand' is also a treasure trove for anyone interested in the wheelings and dealings that - historically - have characterized these most cumbersome and disliked buildings.

I have synthesized the most interesting facts listed in the book; here they are - followed by selected extracts of "Divided We Stand":

1- THE TOWERS WERE A SHAMBLES FROM THE WORD GO:
"In 1985, when New York State moved most of its offices out, Dean Witter consolidated its operations in twenty-four floors of Tower 2 under a twenty-year lease. Visiting the brokerage and investment firm's offices and cafeterias, one invariably found them spotlessly maintained. But on adjacent floors, particularly those with multiple tenants, the paint was dingy, the carpets were stained, fixtures remained broken, and burned-out fluorescent lights went unreplaced, as did discolored ceiling tiles. And the listing of a company on the directory did not reliably indicate that a company was still there."

2- FOLLOWING THE 1993 BOMBING, 50,000 workers were displaced and 350 tenants were RELOCATED OUTSIDE THE WTC.
"The February 1993 blast in the basement of the World Trade Center killed 6 people, injured 1,000 others, displaced 50,000 workers, and threw 900 Vista Hotel and Windows on the World employees out of work, but it also provided a modest boost for the regional economy. This, at any rate, was the conclusion the Port Authority came to in an April 1993 report released six weeks after the bombing. (...) For the agency, this silver lining was due in part to the ease with which the 350 bombed-out trade center tenants could be moved into abundant vacant office space nearby."

3- AT THE END OF THE 90'S HUGE QUANTITIES OF OFFICE SPACE WERE ANNOUNCED RENTED - BY THE PRESS
"The Port Authority closed out the 1990s with a stream of press releases announcing the rental of unimaginably huge quantities of trade center office space to "cutting-edge" firms like Sun Microsystems. Yet around the complex a million square feet stood empty, and the buildings originally intended as great catalyzing chambers of world trade were, by degrees, transforming into a kind of disjunctive real estate layer-cake. One story above the carpeted, wood-paneled offices of a Japanese securities firm, a group of artists filled bare walls with boldly colored images and hung sculptures from the exposed ceiling girders of a vast echoing cavern. As part of a Lower Manhattan Cultural Council program that turned some of the vacant space in the towers over to artists rent-free, 40,000 square feet of concrete floor lay paint-spattered and strewn with the raw materials of a creative urge that has never been easily reconciled with the imperatives of a bottom line. "


In any case, let this previous post by our member Brutal Metal be an inspiration to all - in order to overcome this myth:
Brutal Metal wrote:
I thought during the 90's the Twin Towers and the businesses and institutions housed within was considered the Heart/Mother Brain of All the Worlds Financial markets with companies all over the world taking up office space there??

Two very different stories but no matter which you believe they both would explain why the lack of tenants. Have few in the beginning so its easy to control , then in 1993 stage a bombing and kick out 50,000(the number they told us were in there!) All relocated OUTSIDE THE WTC.

Personally I think there maybe truth to both but either way they explain how these massive buildings could be emptied.

Now to some media fakery. Use your eyes. Is this a real event or a simulation?

First some stills, then collapses.

The Moving Bridge which BTW Is 7.7 Miles Away!

Is this a real image of Manhattan? Do buildings just vanish like a magic trick In NYC ???

This is the video Judy Woods Uses As "Evidence" of her D.E.W. Theory. It's not hi-tech weaponary! It's simply a fake video made with CGI. Just like the other video.

Why are there about 2500 missing "victim's" names in The Social Security Death Index??????